Almost every morning I get up here on Samos at seven o ‘clock, shortly afterwards I am in the partially sleeping camp to hand out tickets for the laundry. At the moment we are at a level where the containers stand surrounded by tents. Dently standing together double-decker beds housing up to four people, with more mat bags blankets or mattresses lying on the floor. Mainly young men live here, but also a few women. The walls are inscribed in all sorts of languages with “Samos no good,” “Freedom” and (so a community volunteer who speaks farsi tells me) motivational life wisdom. There are tents around the containers. In other containers there are partitions. As on a public toilet, you can hear every sound of the other compartments through the gaps  This is where families and women’s groups live.
I find people very adorable in the morning. With a crumpled face and sleepy look, residents open their door or tent a gap and are relieved to see us instead of getting news from the administration.
In this container seem to be bed bugs everywhere, all the kids are covered by bites and the worried mothers show us their little ones. We have to explain, that we don’t belong to the camplards and can’t do anything except wash anything that might give a few days of rest. I’m terribly sorry and I’m glad that I can assure that’s not okay and any outrage is more than justified. On weekends we’re not allowed into camp-so I can sleep, I guess on Friday night when I go to bed, comes Valentina a Comcompassion to my room, only few hours later. Completely dissolved, she shakes me awake.

There was a protest by people from the camp, police slamming everyone together,
Tear gas, it needs witnesses, eyes that are there to prevent the worst, as many eyes as possible. Two volunteers were arrested at the laundry-come quickly, take your ID with you.

As inept as I am in the morning, I only slowly understand seriously, the absurdity of the situation. And that happens in the current reality. Not five minutes away from me. I slowly get the tears shot up, I am generally quite fast upset before I had morning coffee. I know that I have to pull myself together and use the three minutes to collect myself to spot with my presence any effect to score.
I encounter the riot police-in full montage, I can hardly believe it.
Once at the laundry, Valentina accepts laundry bags as if nothing had happened. So we do that until no one is left to queue. Later that afternoon, people apologize for not taking the laundry to the laundry in the morning, as worn off because the camp was closed. It stirs me and pains how humanly and purely, honestly and respectfully the people encounter while they are subjected to such brutal undignified acts. As we leave the laundry to run to the entrance of the camp, there stands a grape of African men at the base of the camp, encircled by three times as many, mounted Policemen. We stand opposite an NGO on a property that we know and just look at it. Inconspicuously, Agus gets her phone out to take pictures. A Greek next to me is faking at us, we’re not supposed to take pictures and not a minute later a police officer is coming up to us, ID cards. No photos.

They take us to the police station.
We complain that there is no reason to take us, but we also know that being too rebellious and causing problems with the police only hurts our organisation and the protection seeker.

They take us to the police station.
We complain that there is no reason to take us, but we also know that being too rebellious and causing problems with the police only hurts our organisation and the protection seeker. It disgustates me, but I get in the car. The protesters are graying as we are taken. I hope that this does not bring renewed escalation and no one will be hurt. Agus alerts the police officers on the ride that they are just breaking the law. She knows it. They don’t say anything. As we stomp up the guard’s stairs, we glimpse our colleagues. Not only those from the laundry, but also the entire NGO for legal advice is already there. A few hours ago we were still drinking beer together, a few had glitter on our face. Also, a journalist who was there last night sits on the station’s table smoking a cigarette. They tell me they woke up from the sounds of protest. They live very close to the camp and outside their home the demonstrators were beaten up by police. With batons, the use of tear gas. Flipflops left in front of police
Refuelling demonstrators were shattered and dropped mobile phones smashed. We give off all our phones and are supposed to wait. “Background check.” We all realise what’s happening right now and it’s disgusting. Corruption, covering up obviously indefensible police behaviour. As the reason for our arrest, we are told that we had provoked the demonstrators, that it is an act for preventing escalation. What a joke. Every demonstrating person of the morning was chased, beaten and cornered by at least one police officer. The only satisfaction is the cigarette bag, which I drop to the floor while I smoke on the ward. We all know who has the power to do whatever they want, it doesn’t do anything for the people in the camp to continue performing here. We don’t let much comment and try to distract ourselves a bit and stay loose.

In addition, it is good that we are there, so no camomers without legal assistance can be brought to the station, injured and imprisoned for no reason. At least not as long as we’re there.

In addition, it is good that we are there, so no camomers without legal assistance can be brought to the station, injured and imprisoned for no reason. At least not as long as we’re there. (… Later, we learn that three people of protest were detained. Including a woman.) After three hours of pointless waiting, pure chicanery, they release us. None of us are highly criminal and our identities are right, they know after 180 minutes of research. The protest is now over, everything has calmed down. A legal adviser friend who has been in Greece for just under a year is angry, angry and sad for the first time in three months. He tells me about the injustice that the most disgusting thing is that the worst thing that can happen to us is the best end of any arrest of the wanted by the protection, in Europe in 2019, the day before the election of the democratic continent …
All we can do is bring that into the media. Be there, keep going and not lose the heart. Our organization’s media officer is very aware of issues we might get, so we remain anonymous and can barely publish anything directly, for which we have no evidence. The use of tear gas that it was a completely peaceful protest that we were arrested. So we commission other media and groups and publish the information anonymously.
Europe, 2019

The plants are considered a sign of peaceful protest. 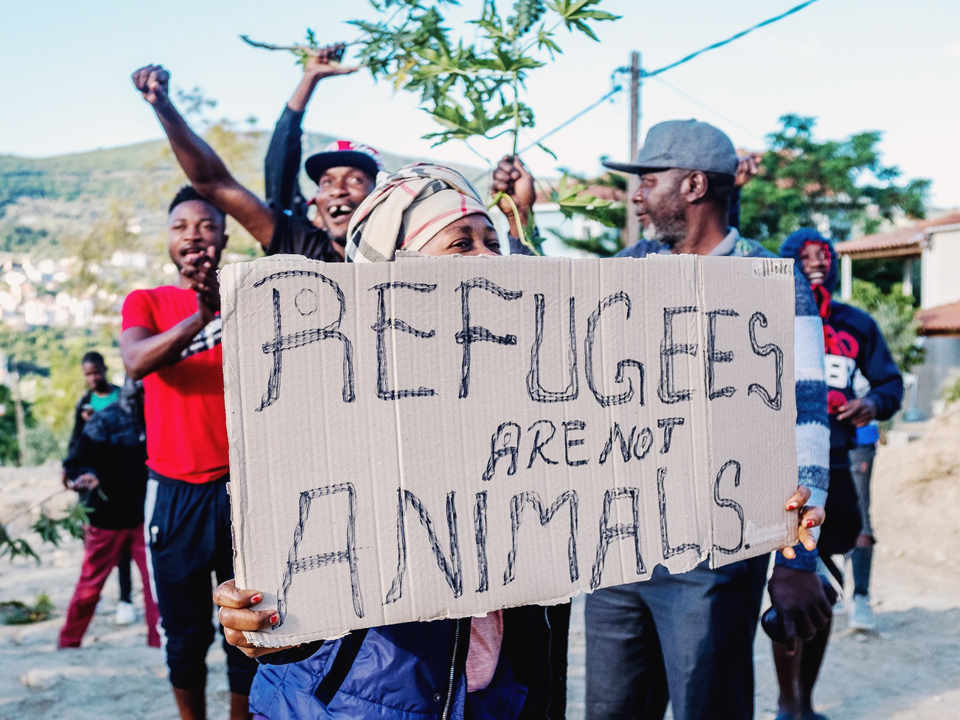